What is the Dunning-Kruger Effect?

The Dunning-Kruger Effect is the tendency for those unskilled or uninformed in a particular area to overestimate their knowledge or skills. So, people with poor math skills or language skills might estimate that they are above average when they are in fact vastly below average. When we know only a very little bit about a subject, we lack awareness of how much more there is to learn about the subject. This means that we have no way to evaluate our level of knowledge against the total knowledge available in that subject. When we have just learned about something, we may erroneously come to the conclusion that what we have learned is all there is to learn about it. However, as we study further, we find more and more that we didn’t know, and we come to realize that there will be still more to learn in the future. 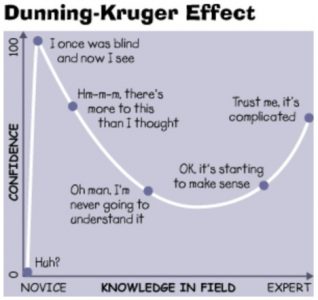 There is another aspect to this effect which affects experts and the well-informed. While the unskilled and uninformed tend to overestimate their skills, those who are highly skilled and well-informed will tend to underestimate their knowledge and abilities. After we have begun to explore a subject more deeply, we see how much more there is to know. We can look back at when we thought we knew all there was to know about the subject and project this new lesson forward, recognizing that our ignorance of what we don’t know is invisible to us.

At the core of the Dunning-Kruger effect is self-assessment, our capacity to judge our own abilities and skills. This is a form of metacognition, or thinking about how we think, knowledge about how much – or how little – we know. What the Dunning-Kruger effect hinges upon is the opposite of metacognition – meta-ignorance. This is the degree of ignorance we have regarding our own ignorance. Dunning and Kruger explained this effect with the following statement:

What this means is that self-assessment fails in the uninformed, while experts fail in the assessment of others. The uninformed and unskilled err in assessing their own abilities, while experts tend to misjudge others, thinking that these others have more knowledge and skill than they do.

There are a few other results of this effect. For one, not only do unskilled and uninformed individuals overestimate their abilities, they are also unable to see the depth of their own inadequacy. Furthermore, they will tend to be unable to recognize knowledge and ability in others. Once these individuals receive further training and improve their skills, their self-assessment capacities improve as well. They are then able to recognize their previous errors and lack of skill.

As with many psychological effects, the Dunning-Kruger effect was brought to the attention of the public by a highly publicized criminal case. In this instance, it was the case of a bank robber named McArthur Wheeler. Wheeler had learned about the use of lemon juice as an invisible ink. He took this knowledge one step further, believing that he would be invisible to video cameras if he covered his face with lemon juice. So this is exactly what he did. In 1995, Wheeler robbed two savings banks in Pittsburg with his face covered with lemon juice. He was arrested later the same day due to a tip received by the police from someone who had seen his face. Wheeler was dumbstruck when the police showed him the footage from the banks. He couldn’t believe that he was actually visible on the video feeds.

This is a pretty profound example of the Dunning-Kruger effect, as it would have to be to catch the attention of social psychologists sufficiently to name a cognitive bias after it. However, there are many examples of this effect in daily life. We often encounter individuals who have a generous impression of their own skills when in fact they are average at best. Whether we talk about those in the corporate sphere or people who talk about social or political issues without having a solid grounding of the subject, individuals demonstrating the Dunning-Kruger effect will be unaware that their knowledge and skills are less complete than they think.

The classic test of the Dunning-Kruger Effect, as performed by Dunning and Kruger themselves, was an examination of the self-assessment skills of undergraduate psychology students. These self-assessments were then compared to objective tests of their logical reasoning, grammar, and humor. It was found that highly skilled students underestimated their capacities while less skilled students overestimated their own capacity. Four different studies were conducted, and in each, those in the bottom 12th percentile of the study group assessed their own skills in the top 38th percent. It’s interesting to note that the self-assessment of all students was about equal, regardless of their actual skills.

Implications of the Dunning-Kruger Effect

One of the key considerations of the Dunning-Kruger effect is that it requires a certain degree of knowledge and awareness to accurately self-assess. This same knowledge and awareness is what is required to perform well. So, poor performance in a certain sphere will accompany the lack of awareness about what is needed for achievement and excellent in that sphere. However, by refining our skills and learning more about a particular area, we are better able to see where we went wrong and perform more effectively in the future. At the same time, we will be better able to see where this knowledge has been lacking and self-assess. Finally, we will be able to see how our previous knowledge has been lacking, and project this forward into the future, recognizing that even future learning will not give us a comprehensive and unassailable understanding of any given topic.

The most important aspect to remember about this is that the Dunning-Kruger effect is not the province of a few, less skilled or intelligent individuals. Every single person in the world is subject to this effect. We all have some areas where we are knowledgeable and other areas where we are relatively inexperienced or uninformed. So, rather than pointing to the individuals that we can see in our experience have demonstrated this effect, we should look at our own behavior and closely examine those areas where we believe we are skilled and knowledgeable. Considering that experts will tend to underestimate their knowledge, the key is not to correct for the effect by lowering our assessment of ourselves. Instead, we can keep an open mind, question our knowledge, and see if there is more to learn, regardless of our level of training in a given subject.