What is the Theory of Relativity?

The theory of relativity, developed by Albert Einstein, has had as profound an impact on the world as any scientific breakthrough in history. Not only did relativity fundamentally change our understanding of the universe, but it led to new technologies that have had a lasting impact on human society.

Albert Einstein was born in Germany in 1879. He was a precocious student who was gifted in mathematics and eventually became a theoretical physicist. His theory of relativity is in fact two separate but related theories, each offering solutions to different problems. These two main theories are:

Modern physics can be characterized by three different models of the universe:

These models are all very successful in describing natural phenomena, but they each only apply to limited cases.

Classical physics, also called Newtonian physics after 17th century physicist Isaac Newton, is the oldest model and the one that applies best to everyday human experiences. Classical physics describes the laws of motion and the mechanics of gravitational bodies. In the late 19th century, however, it started to become clear that the classical model was incomplete. It failed to adequately describe the behavior of light and the inner structure of the atom.

Classical physics works for cases involving scales greater than that of the atom but speeds much less than the speed of light. Quantum physics best describes phenomena on the subatomic scale but at slow speeds. Relativistic physics applies to scales greater than the atom and speeds approaching the speed of light. The goal of modern physics study is to develop a single model of the universe that can describe all phenomena, but so far no such model has been agreed upon. Figure 1 shows the cases where the three physical models best apply. 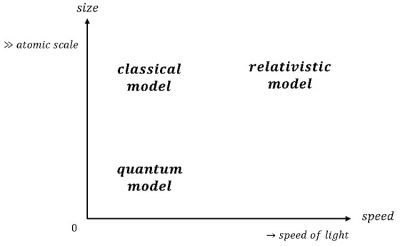 In the centuries leading up to Einstein’s breakthroughs, there were increasingly frequent debates about the nature of light—particularly the speed of light. Since light behaved very much like a wave, scientists struggled to understand how it could travel without a medium through which to move. Sound waves travel by displacing and compressing matter—so they cannot exist in a vacuum. Water waves transfer energy by water surface motion. However, light can propagate through free space with no medium to displace. Scientists assumed that the universe therefore contained an invisible medium which they called the “aether” (or “ether”). Experiments, though, always failed to detect this medium, so light remained a mystery.

To help solve some of the questions associated with light, Einstein made two critical assumptions, or postulates: 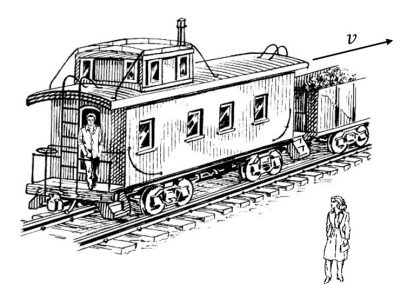 The two simple assumptions made by Einstein had profound implications on the mathematics of space and time. Although these implications seem counterintuitive to everyday human experience, their predictions have been repeatedly verified. Among the implications of special relativity are:

Since measurements are relative to specific reference frames, physicists could do away with the notion of an aether as a medium for the propagation of light.

A famous consequence of relativity is the equivalence of mass and energy. This is the notion that the total energy of an object is equivalent to its mass at rest times the square of the speed of light. The simplified mathematical version of this equivalence is Einstein’s famous equation:

Rearranging the equation reveals that not only does a mass have an equivalent energy, but a quantity of energy also has an equivalent mass:

The laws of physics remain the same in all reference frames. Thus an observer in an accelerating reference frame cannot distinguish that frame from a stationery frame that is in a gravitational field. 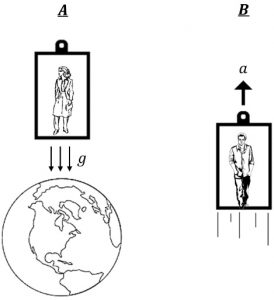 The chief implication of this equivalence principle is that gravity is a deformation of spacetime. The presence of mass “bends” space and time in a mathematically predictable way, resulting in the acceleration that we refer to as gravity. The space and time distortions predicted by general relativity have been experimentally verified.

The theories of relativity quickly led to advances in technology, the most immediately impactful being the development of nuclear energy. Satellite-based global positioning systems (GPS) must account for both special and general relativistic effects to operate accurately. Other sciences, from atomic physics to astrophysics, have also benefited from the theoretical and mathematical implications of relativity. The future of physics lies in the synthesis of the relativistic and quantum models into a single coherent “Theory of Everything”.