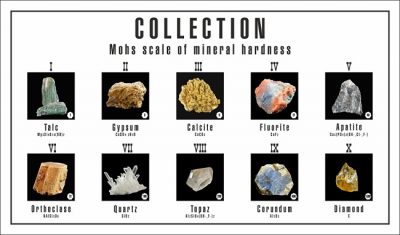 The Mohs hardness scale was created by and named for German geologist Friedrich Mohs. Mohs was particularly interested in studying the physical properties of minerals instead of their chemical composition, as was customary in the study of mineralogy at the time. The Mohs hardness scale was developed in 1812 and is, to this day, the most commonly used hardness test in the natural sciences, although more quantitative hardness scales exist. One such test is the Vickers scale, which measures a material’s resistance to a force applied by a known mass. 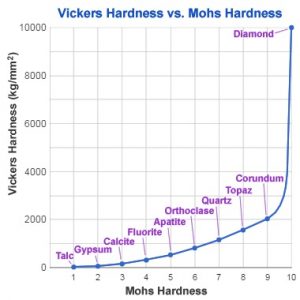 When Mohs developed his method for using resistance to being scratched to assist in mineral identification, he simply chose 10 common minerals, ordered them from softest to hardest, and somewhat arbitrarily assigned the integers 1 through 10 to describe each mineral’s hardness. Therefore, when we look at the relationship between Mohs’ qualitative scale and Vickers’ quantitative scale, we can observe that the difference in hardness between each index mineral on the Mohs scale is not constant. We also observe that the difference in between the softer index minerals is smaller than the difference between harder index minerals. This kind of scale is called an ordinal scale, meaning the categories of each integer are observable in nature but the distance between them is variable.

The index minerals on the Mohs hardness scale are:

How to Perform a Mohs Hardness Test

To perform a Mohs hardness test on a mineral specimen, a Mohs hardness testing kit is required. Often, this is a tray containing the 9 index minerals, labeled 1-9 and laid out in order of hardness (diamonds are often left out of field kits due to their high cost).

Even faster than performing a Mohs hardness test is a common objects test, which uses the same principle and methods of the Mohs hardness test but uses objects that may be more readily available, such as a fingernail (2.5), penny (3), nail (4), or glass (5).

Uses for the Mohs Hardness Scale

The reason for the Mohs hardness scale’s popularity is likely its convenience in assisting in quick mineral identification for field geologists. It is particularly useful in differentiating between minerals that may have similar physical properties and depositional settings. For example, a mineral in the field may have many properties that calcite and quartz share. However, we know that quartz is a much harder mineral than calcite (quartz is a 7 and calcite is a 3 on the Mohs hardness scale). By performing a simple scratch test to determine how hard the mineral in question is, we can quickly determine whether we are looking at quartz or calcite.

It is important, however, to note that there are variations in hardness among specimens of the same mineral type. When looking up the hardness of various minerals, it is common to see them listed as a range over half or even a whole integer. This variation can occur in minerals of the same type that are grown in different conditions, resulting in different habits and other physical properties. Another way this can occur is if the specimen in question has undergone significant weathering, making its surfaces softer and easier to scratch. Avoid an inaccurate test by choosing a fresh surface to test on.